FINAL CALL FOR: …And The Lamb Lies Down On Broadway

This November will see the Genesis album The Lamb Lies Down On Broadway celebrate its 45th Anniversary. If it was a wedding anniversary, then it would be the sapphire anniversary. Staying with the wedding thing, it is odd then that merely six months after the release the band and singer effectively got divorced.

In 2013, I started working on the book. I had a publisher and was amassing interviews, images, and content for the book. All this came crashing down in 2018 after the publisher pulled out of the deal. However, I chose to continue, and the book was subsequently published in December 2018.

The overwhelming response was positive, and now we have just 15 copies left of the hardback edition. This book will NEVER be published again, once these 15 copies have gone. That is it.

If you are thinking about ordering a copy for someone as a Christmas or forthcoming Birthday present, now would be the time to order. Here is what you get:

Interviews with Dale Newman, who was Mike Rutherford’s guitar tech on the tour, Aubrey Powell from Hipgnosis about the cover of the album, and interviews with both the lighting engineer and the European label manager.

Countless pages of memorabilia and other photographs, including content from the singers in both tribute bands The Musical Box and Carpet Crawlers. Both bands have performed the complete Lamb Lies Down On Broadway show more times than Genesis.

There are also first-hand accounts from fans who saw the show.

The book was limited to just 300 copies worldwide and is numbered and signed by me. There is also an insert signed by guitarist Steve Hackett. All in all, it’s a fine collector’s item for the Genesis fan in your life.

You can order the book from here:
https://jonkirkman.co.uk/?product=genesis-the-lamb-lies-down-on-broadway-signed-hardback-copy

But don’t take too long Counting Out Time, or you may find we are sold out! 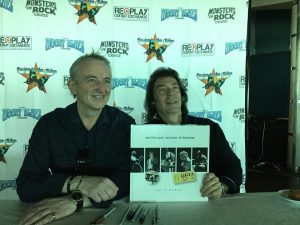 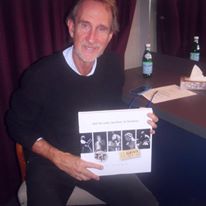 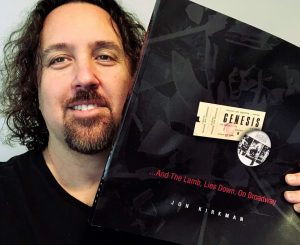 Steve Hackett, Mike Rutherford after signing my book and musician Dave Kerzner with the book