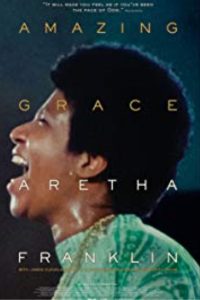 In January 1972, Aretha Franklin decided to make a Gospel album. Now, she could have quite easily have done this by going into a recording studio and recording said album but with gospel musicians and a choir. Instead, she decided to keep it real and film and record the event over two days on location at New Temple Missionary Baptist Church in Los Angeles.

Sydney Pollock was the director and Joe Boyd, among many others, was the producer of the film, which included legendary session musicians Chuck Rainey and Bernard Purdie.

Here, however, is where it becomes complicated. Due to technical difficulties at the time, it was impossible to sync the visual with the audio, and so the film was shelved. Fast forward over forty years and the technology now exists to marry the incredible audio performance to the equally incredible visual performance.

In 2019, we can now re-live that amazing (no pun intended) not to mention historical moment in music history. The quality of the performance is as you would imagine 100%. The film has a grainy look to it, which to me really adds to the authenticity of the whole event. As I mentioned, it was filmed over two evenings, and during the second evening, both Mick Jagger and Charlie Watts are in attendance, as The Stones were in LA  working on the album Exile On Main Street. I am sure that Charlie and Mick enjoyed the experience, as we can too, but with the added thrill of actually being there.

The performance transcends anything you may have heard about this, and even if you have the album, and millions do, it is merely part of the story.

Thanks to technology, we can all be in the New Temple Missionary Baptist Church in LA on those rainy January evenings in 1972 and watch Aretha in Church, her true home. To say it is an uplifting experience would be stating the obvious, but it really is powerful stuff, enough to bring a tear to your eye and your heart lift.

The star, of course, will always be Aretha, but the supporting cast are never just supporting, they are all at one with Aretha and the invited audience. We will never see the like of Aretha Franklin again, and her loss will always be felt by those who hear her. We should, however, be thankful for films like this and the album of the same name. Amazing Grace, indeed.