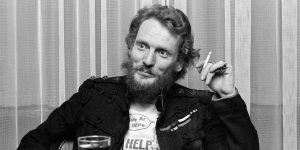 I was saddened today by the news that Ginger Baker had passed away at the age of 80. For most people, they will always associate him with Cream, the band he formed with Jack Bruce and Eric Clapton. For sure, that is where Ginger made his commercial name, but the truth of the matter is he was a legend and widely respected way before Cream started selling records by the truckload.

Ginger’s first love was jazz, and woe betides anyone who called him a rock drummer. He started his career playing with jazz acts Terry Lightfoot and Acker Bilk. His first gig of note, however, was in Alexis Korner’s Blues Incorporated. From there, he joined the Graham Bond Organisation alongside initially, Graham Bond, John McLaughlin, and Jack Bruce. McLaughlin left, or, according to Ginger, was sacked by Ginger for moaning. His musical relationship with Jack Bruce was incredibly good, although personally, it could be difficult, as admitted by both men to me on separate occasions. They both, however, loved each other’s playing.

When Cream formed in 1966, they were fêted both by lovers of music and the music press. The band became very successful very quickly and massively popular, particularly in America. It was all too brief though, and after only two years the band decided to split following a farewell tour. A final concert was held at the Royal Albert Hall in late 1968. From here, Ginger formed Blind Faith with Eric Clapton, Steve Winwood, and Ric Grech. Their success was almost guaranteed from the start. The band recorded a very good debut album and played their live debut at Hyde Park as a free concert. This concert was filmed, and when it was officially released many years later, I did the official interview for the band with Ginger.

In the interview, he told me he had misgivings about launching in such a high profile manner, and he felt that it was the management just trying to squeeze money out of the band while it could. He also rated the Blind Faith album very highly. He felt the songs were excellent and wished the band had recorded another album. Sadly, it was not to be as following the American tour Eric left to play with Delaney and Bonnie, and subsequently a solo career.

Ginger’s next move was the obvious one, and he formed the first line up of Ginger Baker’s Airforce. Initially with Ric Grech and Steve Winwood, the band also featured Denny Laine and Graham Bond. Grech and Winwood soon left to reform Traffic. The Airforce, however, recorded two albums that were received very well critically. During the seventies, Ginger went to Africa and played with many African artists including Fela  Kuti. Forming his own band Salt in 1972, he also built his own recording studio ARC, and Paul McCartney recorded the track “Bluebird” here for his Band On The Run album with Ginger providing percussion. The seventies also saw Ginger return to rock music when he joined forces with Adrian and Paul Gurvitz in The Baker Gurvitz Army. Their three albums were recently reissued by Cherry Red Records and still sound incredible.

The next forty years would see Ginger form various bands, either under his own name or he would play with bands like Hawkwind for an album (Levitation) and a tour. A big shock for many was when he joined John Lydon’s band Public Image Limited. Whilst it may have been a shock to some, the partnership was a good, albeit brief one, and the album featuring Ginger entitled Album was commercially successful. In the nineties, he would even join his old Cream band ate Jack Bruce alongside guitarist Gary Moore in BBM for an incredible album and tour. His real love, however, was jazz, and he returned to that frequently. His most recent album entitled Why was released in 2014. Away from music, Ginger had an abiding love for the game polo and spent many years buying polo ponies for his stables and playing at a very high level.

For most, however, Ginger will be remembered as an intuitive, innovative, and inspirational drummer. Cream also looms large in his legend, and in 2005, after thirty-six years, the band reunited for a series of concerts at the Royal Albert Hall in the UK and Madison Square Garden in America. It goes without saying that these concerts were massively successful.

Ginger died peacefully in hospital on the 6th of October at the age of 80. Many people may like to think he was an irascible, grumpy old man who, in his later years, was not particularly nice. My own experience of working with him was the opposite. He was generous with his time, articulate, and friendly with a very good sense of humour. He was also kind enough to ring the record label to tell them he enjoyed the interview and that I had done a good job. He did not need to do this, but I was happy when the record company rang me and relayed that message on to me.

Ginger could be a difficult man, of that I am sure, and he did not suffer fools gladly. However, having said that, over the years I am sure many people have tried to put him into a niche that he was not happy with. My memories of him are good ones, and of course, the music he leaves behind as his legacy is second to none. I will miss him both as a character and as an amazing musician. We are unlikely to see his like again.