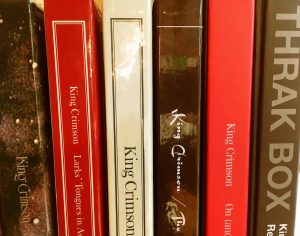 I would like to bring to your attention some quite magnificent boxed sets from King Crimson. If  Prog is the relative in the family you rarely see, then King Crimson are the darker end of that branch of the family. Panegyric is the label that has been working through the vaults over the last few years to bring you some wonderful “Super Deluxe Editions” of your favourite King Crimson albums. 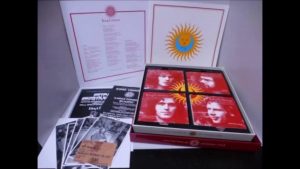 This album began one of King Crimson’s most popular periods, and it is an album that retains its fondness amongst the Crimson fan base.

This boxed set, which comes in a 12” box, contains an amazing array of music memorabilia and video footage. Across the 14 discs of music and video, you have a complete overlook of the entire album, both from the early stages of recording the album through to the final album. The audio has been remixed by Steven Wilson, and video footage of the band on television in the studio is also included. Add to this all the live bootlegs in the best quality the band could find, and you have a great package. All of this, along with a booklet, sets out the tone and the creative element of the original album. Larks Tongues In Aspic is a career-defining album, and for many, it’s an album that still retains the interest of the fan base over forty years later. 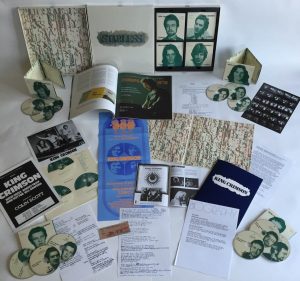 Chronologically speaking, the second album in 1974 from King Crimson was Starless And Bible Black, which was released at the end of 2014 in a Deluxe box. And when I say Deluxe, I mean Deluxe! Even bigger than Larks Tongues In Aspic, this box contains 27 discs and a DVD containing various 5.1 remixes and live shows. For some, it might be considered a little over the top, but really, for fans of Crimson – and I know there must be a lot of you out there – this boxed set is the Rolls Royce of boxed sets. It is the fourth in the series so far after Court Of The Crimson King, Larks Tongues In Aspic, and Red, and does not disappoint fans of this illustrious British progressive rock band. It is just the kind of off the wall listening experience you would enjoy listening to outside on the terrace with a glass of a cheeky little white wine… Or Vimto. Whatever your drinking choice, this boxed set is something to behold and will certainly take up a good few hours of your time working through the contents. 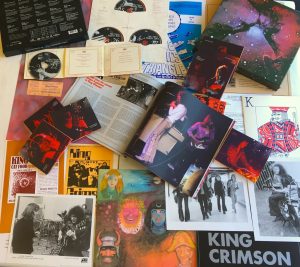 What about In The Wake Of Poseidon, Lizard, Islands, and Earthbound? Well, there is a boxed set that covers all of those albums. Bunching these albums together, however, does not diminish or distil the essence of King Crimson or this boxed set. In fact, if anything, it makes the contents of this box more interesting. Essentially,
In The Wake of Poseidon and Lizard were studio albums that were never actually toured. As we know, the Islands line up of Crimson – while being somewhat short-lived – did manage to play a great many gigs. This box is entitled Sailors’ Tales, but really, it could have been entitled “Box Of Delights.” As with the other Crimson boxes in the series, there is a phenomenal amount of previously unreleased material, both studio and live, spread across an amazing 27 discs. In my experience, it seems the Islands line up is the member of the family nobody talks about. Why that seems to be the case, I have no idea, because as a band, they really pushed the envelope in the live arena. And in the studio, to my ears, Islandsis as good as anything before or after. There is, of course, the live album Earthbound, which was essentially an authorised “bootleg” in the days before that term came into common usage. Sure, it is lo-fi, and no amount of remastering will really improve that, however, maybe my ears do detect a slight improvement. What I can say, is that this live album is really exciting and proves that not all of Crimson’s output is serious brow-furrowing contemplative music. This band rocked and left all the rough edges on. I get a feeling that Robert Fripp actually may secretly like this period of the band, despite his personal issues with the members. As with all the other boxed sets in the series, Panegyric has pulled out all the stops with a great in-depth booklet, along with many other extras, including press sheets, photographs, and press releases. This boxed set is definitely one to own.

All the contents of this set sound amazing. Even the live bootleg material manages to catch and hold your attention while King Crimson work their magic, rather like Baron Frankenstein and his monster. This material has certainly stood the test of time, and once again, Panegyric has shown the rest of the world how to put together a super deluxe edition of an album. They have filled their boxes with all sorts of goodies alongside the music, including prints of the artwork of the album, and a detailed book and all kinds of memorabilia including photos and replica tickets. Of course, the audio is once again overseen by Steven Wilson, the man who really does deserve a Knighthood for his services to progressive rock. 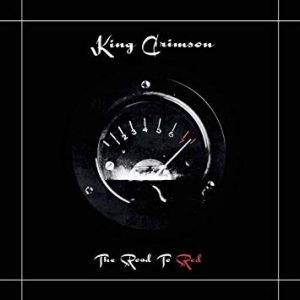 The Road To Red covers the final King Crimson studio album from the band in the seventies. Robert Fripp would go on to other projects before a rejuvenated King Crimson hit the road in the eighties… (More about that soon).

Red has been cited as a landmark album and the favourite of many musicians including Nirvana’s Kurt Cobain. It is easy to see why. It is the kind of album that picks you up, shakes you by the neck, and then lays you down again. None of this gentle, I might add. By this time, certainly in the live arena, the band were a potent force, and in the studio too. You can hear how good the band was live on the many live albums contained in this box, including USA, which was the live album released posthumously in 1974. Full content-wise, this is what you get: 20 CDs of live material from the final USA & Canadian 1974 tours, 1 CD of studio material featuring a new stereo mix of Red, 1 DVD featuring various versions of the USA album/concert, 2 Blu-Ray discs featuring 5 complete concerts in high-resolution stereo along with Red in hi-res stereo and 5.1, and a 12” box with booklet, memorabilia, and album prints.  Is that enough to whet your appetite? Well, it should be, becauseThe Road To Red boxed set is certainly something any self-respecting Prog fan should have in their possession.

On (And Off) The Road covers the period when King Crimson re-launched themselves onto an unsuspecting public. I say unsuspecting because even though the line-up of Robert Fripp, Bill Bruford, Tony Levin, and guitarist Adrian Belew had started playing together as Discipline, Robert Fripp obviously decided the band were ready for the King Crimson mantle. Again, you get the albums Discipline, Three Of A Perfect Pair, and Beat all nicely remixed for 5.1 by Steven Wilson. Plus, there’s an absolute goldmine of extras, including more filmed footage of the band than ever before. Of that filmed footage, I vividly remember watching the band’s performance on the Old Grey Whistle Test and being almost relieved that the band had once again come back. It really was so good to see them again. This band, however, was a totally different band from the King Crimson that had ceased trading in 1974.

This is what you get for your hard-earned cash, and I must admit, it is rather tempting and well worth the money: 10 CDs of studio and live material from 1981-1984, 3 DVD-A discs and 3 Blu-Ray discs of studio material, video material in hi-res stereo and 5.1, a 12” box with booklet and memorabilia, plus 2 bonus audio CDs. I think you can see that in terms of content, this boxed set will tickle your fancy. That being said, the reality is that King Crimson were never the tickling kind – more a little brutal, if at times incredibly sophisticated. 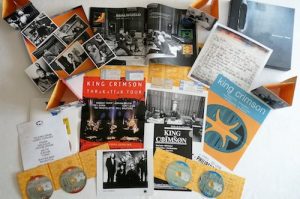 Thrak brings us nicely up to date with the Super Deluxe Editions of the King Crimson catalogue. Originally released in the mid-nineties, King Crimson by this time were probably at their most popular in terms of touring. The band could tour all over the world and receive a rapturous welcome wherever they went. Thrak was a difficult album for some of my friends, as I recall, and yet it remains high on my personal playlist. By this time, the band had expanded somewhat, and the possibilities presented by the expanded line up were well and truly investigated and explored. Whilst not as exhaustive as the Wetton or 70s era of the band, or even the 80’s Anglo American version of the band, what you do get here with the full contents of the Thrak box is quality. Here are the full contents of this wonderful box: 12 CDs of studio and live material, 1 DVD of video material, 1 DVD-A with new hi-res and 5.1 material, 2 Blu-Ray discs of studio and live material in 5.1 and hi-res stereo, and a 12” box with booklet and memorabilia. You also get an expanded edition of the Deja Vroom EP and some incredible live shows, which must rank as some of the best recordings from the band.

So, there it is – a complete set of these boxed sets would set you back a pretty penny, but then again, you cannot put a price on sheer magic and quality, can you? If I were to single out one particular box to perhaps start with, for me it would be The Road To Red. For you, however, it could just as well be Larks Tongues In Aspic,Starless, Thrak or On (And Off) The Road. Really, you are spoiled for choice, but do spoil yourself, won’t you?

While these boxes were originally meant to be for fans and thus limited, the entire set was made available again in the summer of 2019, due to unscrupulous sources selling these wonderful sets at inflated prices. So, if you want these sets, you really need to be quick. With the 50thAnniversary edition of In The Court of The Crimson King due for release, do make sure you acquire these sets from one of Britain’s and progressive rock music’s most beloved bands.