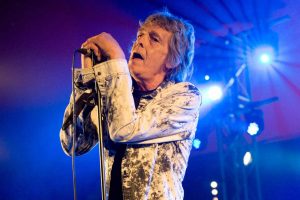 I can remember vividly seeing Eddie and The Hot Rods in 1976. Like Dr Feelgood and The Kursaal Flyers, the band did business under the then-popular Pub Rock banner. They were signed to Island Records and built up a fearsome live reputation. At the front of this high energy band was their singer, Barrie Masters.

Barrie was a consummate performer and great singer and frontman. He had the voice and chops of someone much older than his years would have you believe. When the Rods began having success, Barrie was just twenty-years-old, far younger than some of the punks who came along just after the Rods.

In addition to a great live reputation, the band also began having successful albums and singles, including a live EP recorded at The Marquee, which really captured the excitement of the live Rods experience. The album Teenage Depression also scored well, making the Top 50 in the British albums chart.

1977 was a landmark year for the band and saw them shorten their name to The Rods, which most of their fans referred to them as anyway. More importantly, Graeme Douglas, formerly of the Kursaal Flyers, joined the band. Shortly after the band scored a Top 10 hit single with “Do Anything You Wanna Do.” I saw them again in 1978 at the Liverpool University on a bill that included Squeeze and The Radio Stars. The Rods were headlining that night and took the place apart.

By the time of 1981, however, the band ended and were off the scene for a number of years. Over the last ten years, Eddie and The Hot Rods continued to play both wide and far, still led by Barrie Masters. In 2018, the band announced they would be winding down, and in April 2019, they performed a gig called Done Everything We Wanna Do with former members, and special guests appearing alongside Barrie Masters and the current line-up.

Sadly, on the 2nd of October 2019, Barrie Masters passed away suddenly. It would be easy to tie Barrie into the pub rock movement, but really he was much more than that. He really was a great frontman and led the various line ups of Eddie and The Hot Rods for almost 45 years. I remember that hot night in the summer of 1976 and being part of what seemed to me to be the capacity of Wembley stadium crammed into a club. The heat, the passion, and general good feeling are as fresh in my mind now as it was then, much as the gig at Liverpool University from two years later reaffirmed that feeling.

The Rods were a great band and had a great singer fronting the band. Hearing of his death today, all those great memories returned, although now they become bittersweet. For those wanting to check out the band, there is a great boxed set containing some of their biggest albums, and more importantly, live sessions recorded for radio. We lost another good man today. 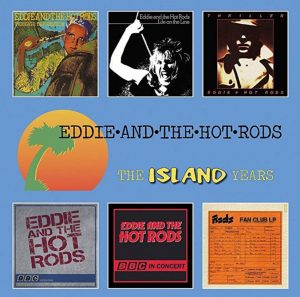