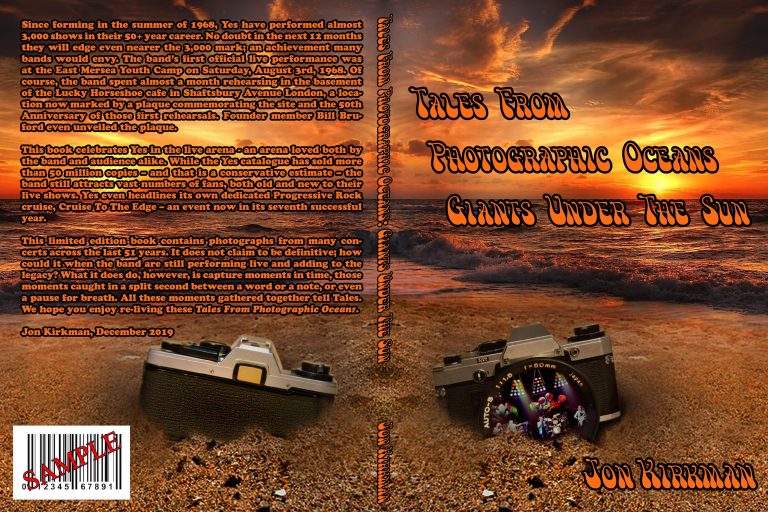 Since forming in the summer of 1968, Yes have performed almost 3,000 shows in their 50+ year career. No doubt in the next 12 months they will edge even nearer the 3,000 mark; an achievement many bands would envy. The band's first official live performance was at the East Mersea Youth Camp on Saturday, August 3rd, 1968. Of course, the band spent almost a month rehearsing in the basement of the Lucky Horseshoe cafe in Shaftsbury Avenue London, a location now marked by a plaque commemorating the site and the 50th Anniversary of those first rehearsals. Founder member Bill Bruford even unveiled the plaque.

This book celebrates Yes in the live arena - an arena loved both by the band and audience alike. While the Yes catalogue has sold more than 50 million copies – and that is a conservative estimate – the band still attracts vast numbers of fans, both old and new to their live shows. Yes even headlines its own dedicated Progressive Rock cruise, Cruise To The Edge – an event now in its seventh successful year.

This limited edition book contains photographs from many concerts across the last 51 years. It does not claim to be definitive; how could it when the band are still performing live and adding to the legacy? What it does do, however, is capture moments in time, those moments caught in a split second between a word or a note, or even a pause for breath. All these moments gathered together tell Tales. We hope you enjoy re-living these Tales From Photographic Oceans.

Pre-sale begins on Boxing Day. Register your interest in Tales From Photographic Oceans by using the form below to be sent a link to purchase the limited edition book (only 300 copies worldwide) as soon as it begins.

Plus, pre-ordering gets your name printed in the book – make sure you get your order in fast so you don't miss out!